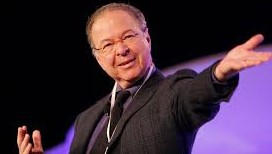 My Friendship with Dr. Leonard Shlain

By Laurel AiricaJune 10, 2020Blog
No Comments

In the early 90s, I was hired to write a catalog for a speakers’ bureau. My job was to digest and distill the biographies and accomplishments of 60 extraordinary people into 120-word sound bites –– with a selected ‘pull quote’ to represent some key element in perspective. It was by this means that I learned of Dr. Leonard Shlain, the surgeon and best-selling author of Art and Physics: Parallel Visions in Space, Time and Light. 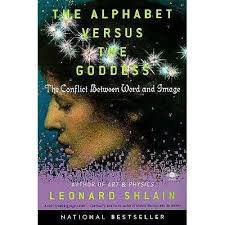 At the time, this towering genius was writing what would become his second best seller, The Alphabet vs. the Goddess: The Conflict Between Word and Image. In it, Leonard traces the decline of goddess worshipping cultures, the loss of status for women, and a cultural admonition against images –– not to the conquering patriarchy but to the spread of literacy in one culture after another.

As I reviewed Leonard’s extensive background, I learned that he greatly valued the ‘Aha! experience’ –– those sudden awakening insights that can alter our perception of reality. This became the descriptive quote I chose for Leonard’s entry in the catalog.

Given his subject matter –– and my own fascination with the hidden philosophy in puns and the symbols of the alphabet –– I reached out to him and was delighted to have the opportunity to spend time with Leonard when he came to Los Angeles on several occasions.

At one of our meetings, I shared with him an extensive recitation piece I’d just completed entitled, eSoterica by Laurel Airica –– the Definitive Exegesis of the Letter S in Verse. After all, who else would be moved to create such a thing?!

After listening to it Leonard said, ‘I don’t know why people aren’t paying you millions of dollars for your work.’ He gave me the name of his literary agent, and encouraged me to reach out to him to explore the possibilities of publishing my innovative thesis on language entitled, PsychoSemantics: English in TranceLation. However, I lacked the confidence to pursue this opportunity.

Most often, Leonard’s encyclopedic knowledge of an enormous array of subjects left me in silent awe and total intimidation. There was, however, one occasion that we shared in Nature that helped alleviate some of my self-doubt.

I took Leonard and my astrologer friend, Marianna, to Charmlee Wilderness Park –– an enchanted realm in the Santa Monica Mountains –– for a walk-n-talk aided by a bit of cannabis. At that time, Charmlee was a beautiful landscape of dramatically theatrical oak trees in intimate embrace with massive boulders. In this sacred garden, we enjoyed the flow of ideas that marijuana so often induces in me.

At one point in our peripatetic conversation through the balletic clusters of trees and around the perimeter of this 500+ acre reserve overlooking the ocean, Leonard and Marianna sat to rest on an enormous boulder in a shady grove. I stood across from them on a small stone in front of a tree that looked to have a crooked doorway open for elemental inhabitants.

Facing them from this somewhat elevated perch, I leaned over to pick up a small, slender frond with a few dried leaves on it. My inspired intention was to use the frond as a wishing wand on behalf of Leonard’s endeavors.

I had long aspired to be an authentic WishFaerie in the lives of other people –– one who can perceive and activate an individual’s greater potential for divine Self-actualization and expression. Thus, I invited Leonard to envision some great desire that he had harbored for a while, and then to let me know when he had it firmly in mind. ‘If you need 50 extra IQ points to complete your manuscript,’ I said to him, ‘that’s not a problem.’ I recommended he disregard concerns that his wish might be egoic in nature.

‘The ego simply usurps the territory unclaimed by the Soul,’ I said to him, hearing the words for the first time and trusting they were true. I simply wanted Leonard to put aside any hesitancy that he might have and boldly claim his greater Soul Power –– a possibility that eluded me completely at that time.

My plan was to wave the branch around as soon as Leonard told me he was ready, as if this ritual could whisk the wish into manifestation. It was all for show, of course, with the thought that it might trigger Leonard’s acceptance of the blessings he desired for himself.

However, just as I was preparing for this bit of theatre, I looked around and saw to my surprise that we were at the center of a circle of trees. Then, all of a sudden it was I –– with arm outstretched and branch in hand –– who was being waved around by a force that did not seem to come from within me. I had become the wishing wand and the trees were waving me around rather vigorously to grant their own boon to Leonard.

I did not lose my perch upon the stone for the several moments or minutes during which my body swayed and undulated while the energy continued to move through me. We were all quite surprised by this sudden completely unexpected display.

I came to think of this event as my Wish-Faerie ordination. On two subsequent visits to Charmlee with Marianna, waves of energy again moved through me, though not with the same vigor and then only briefly. Perhaps this was the completion of a process that began that day with Leonard.

From then on, I felt entitled to describe myself as a Naturally-Ordained WishFaerie –– whenever it felt important to ‘come out’ as fey to a kindred spirit. I mostly used this description when seeking to heighten the receptivity of a person to whom I was giving an intuitive reading and a blessing. My goal for us all is entelechy –– the actualization of our essential potential –– for what else can bring equal joy to our hearts?

On the drive back to Santa Monica, Leonard spoke such a flow of words in praise of my intelligence that I was too startled to hold onto much of what he said. All I remembered afterwards was his telling me that most people enjoyed continual ‘Aha’ moments in his presence but that he had had more such experiences with me over the two weeks in which we’d spent time together than with anyone else in recent years. I really didn’t know what I had said that provoked this response from him. So, I simply held on to those few words and the memory of that occasion.

Bucky Fuller, whom I was also privileged to meet and converse with about our respective perspectives on the alphabet, is quoted as saying, ‘Geniuses are just people who had good mothers.’ Leonard told me that his father was brutal but his mother loving, which helped him to succeed in his life. He couldn’t imagine how people managed who were shown no love or faith in their abilities by either parent. I made no reply to him, too frozen with shame to identify myself as one of those unfortunates.

Based on oft-repeated messages I’d received from both of my parents throughout my life, I had taken on the belief that people’s good opinion of me could only be due to some deception on my part. So, Leonard’s words of praise helped to break through the fog of my self-deception and begin to heal my debilitating self-image.

The evening of our stroll through Charmlee, Leonard and I attended an event that was also attended by the man he had hired to do PR for his book. This man, in turn, had hired me to write the speaker’s bureau catalog and then many multi-component media kits for his vast array of leading-edge clients.

Leonard described to him his amazement with me and commented on how fortunate the man was to have me working with him. The only word I remember from this outpouring of praise is ‘sui generis,’ a Latin phrase I had to look up in order to know that it means ‘of their own kind; unique.’ How hard I had tried to be ‘normal’ while feeling so off-kilter. So, again, Leonard’s words helped affirm me to myself.

At that time, I was still doing intuitive readings for private clients. Never having learned to read Tarot cards or astrological charts, I used the movement of trees in the wind ––and/or asked my houseplants for insights for my clients –– all to surprisingly good effect.

After several clients made significant leaps forward in their careers following their reading with me –– and especially after my natural ordination while endeavoring to bless Leonard’s Alphabet vs. the Goddess project –– I felt entitled to print up these business cards: 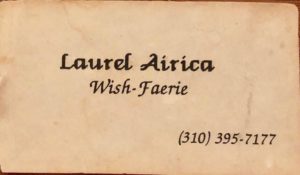 Some time later, I attended the anniversary celebration of the New Age record label that had given me a substantial advance to write an album of my poetry. It is because of Higher Octave Music that I was led to turn my mystic-linguistic perspective on English into WordMagic, a form of sophisticated nursery rhymes riddled with ‘multiple-entendres.’

I had been told by an editor at a publishing house that I’d never get PschoSemantics published without a Ph.D. –– despite the merit of its innovative perspective. Thus, writing chapters-in-verse seemed the ideal solution for delivering my discoveries about words directly to a popular audience without having to face the gauntlet of discourteous academic invalidation. (I’d had quite enough of that growing up).

At the party, the president of Higher Octave introduced me to his beautiful girlfriend who welcomed me to sit at her table. All of her friends introduced themselves to me and we exchanged business cards. To my surprise, every card identified the bearer as a member of the elemental kingdom who was fulfilling some specific creative role. At last, I was sitting with members of my own tribe –– a group of women who acknowledge and affirmed their faerie identities.

Have I since outgrown what I’ve come to describe as ‘adult-onset faerie-identity’? In truth, I have not. In fact I feel more than ever like a human ELEMENtal of the English Language, a veritable––

Recently, I received confirmation for this strange intimation of a deeper identity in a book by Jeffrey Armstrong entitled, Spiritual Teachings of the Avatar – Ancient Wisdom for a New World. In it I learned that members of the devic kingdom can incarnate humanly to lead people back into greater harmony with Mother Nature.

What a revelation that was for me. Since my early 30s I have felt like a human being from the plant family and an exile from the Nature Kingdom, here to help humanity retune the English language till it is as resonant with Earth harmonies as birdsong and cricket choirs whose collective voices inspire the plants to ‘fleur-ish.’

In a chapter of my metaphoric, allegoric faerieography, The wRites of Passion of Philomela Nightingale – a Faerie’s Tale, I assert that ––

…. if our words so melt the heart
they start the Milk of Humankindness flowing
so that every time we speak our mind we set another flower growing
then I believe, before our very eyes, we Human Beings, like Butterflies,
will fully MetaMorphosize….”

As one who holds such a vision can you imagine what a privilege and a pleasure it was for me to have shared an interlude of friendship with an extraordinarily wise, knowledgeable and brilliantly kind gentleman who cracked the code on so many elemental mysteries of our cultural history. And I, being sui generis, have been led to make my own discoveries –– about the Secret Spells of the English Language and how we can collectively, creatively Heal the Word to Heal the World.