The Unquestionable Right to Life!

By Laurel AiricaMarch 30, 2022Blog
No Comments 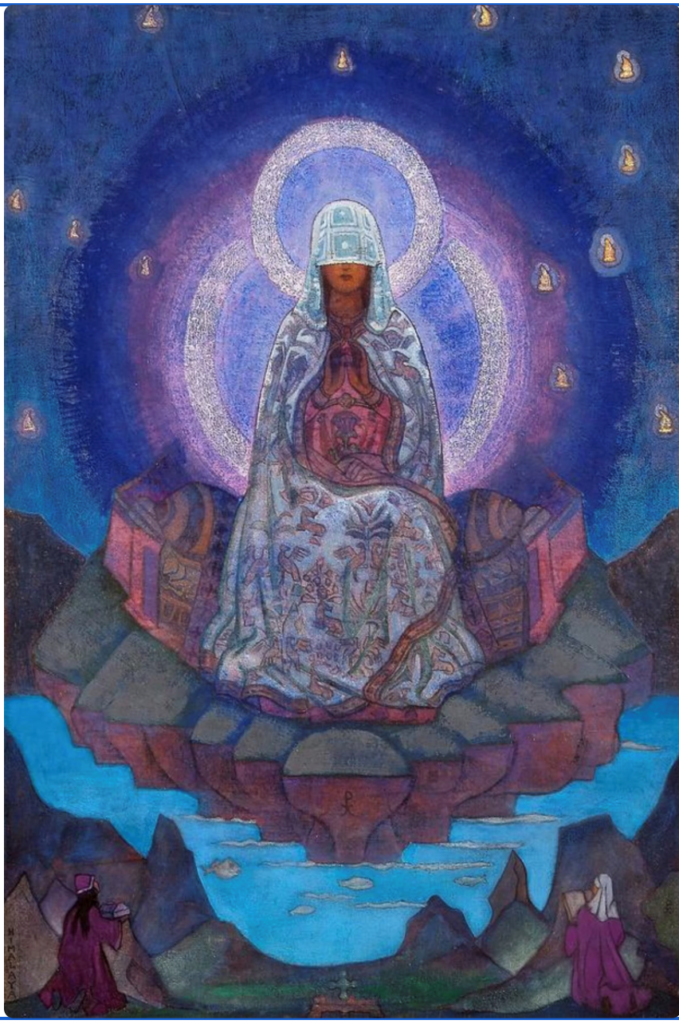 [Mother of the World by the 20th C Russian mystic artist, Nicholas Roerich]

The Unquestionable Right to Life!

One state after another is taking its challenge of Roe v. Wade to the Supreme Court. And for some ungodly reason, the High Court is acceding to their wishes by overturning a woman’s right to make choices for her own body and future.

Thus, women who conceive a child they do not have the means or desire to care for — in some cases, even if the conception occurred through rape or incest — may be compelled by law to carry the pregnancy to term. And once the child arrives, the mother will probably have to inflict upon it the indelible trauma of separation from its source. There is also the possibility that the child will be placed in less-than-competent, loving and compassionate hands –– with painfully disastrous results for us all.

‘Right to Lifers’ show little if any regard for the ongoing well-being of mother or child. Instead, there is the outrageous invasion of a woman’s privacy and the flagrant disregard for her free will and self-sovereignty. There is also a near total absence of concern for the downstream consequences to many that may result from a Right to Lifers’ self-righteous actions.

Consider the flimsy social safety net in place to help a child grow up to be healthy, responsible, well-educated and equipped to contribute its unique gifts to society. Because of the lack of sufficient funding and well-staffed support, we continue to be beset by endless cycles of multi-generational poverty and dysfunction that burden communities at great cost to everyone.

Some states opposing abortion are proposing to offer thousands of dollars to predatory ‘bounty hunters’ –– snitches who will seek their fortune by reporting those who aid and abet a desperate woman to terminate her pregnancy. This plan, which encourages spying and pits neighbor against neighbor, continues the social divisiveness deepened by the pandemic that led many to believe that even a ‘perfect stranger’ could be the very death of them.

‘United we stand, divided we fall,’ was a rallying cry of the American War of Independence. We are now so deeply divided along so many ideological lines that the remaining vestiges of democracy are disintegrating rapidly.

Real democracy can only be ‘of, by, and for the people.’ But how can we possibly come together to create policies that work for all of us when we are operating with such fear-based suspicions, finger-pointing judgments and overall distrust and blame? And how, in the name of the Source of All Life, how did we ever become so completely uncaring toward women, children and our collective future? Where is the sanity beneath the sanctimony driving such policies –– that claim the right to reach into a woman’s womb and determine what must take place there … or else?!

Among the many sources of this madness is the incredible impoverishment of our public education system. Back in the 1980’s, a prominent CEO of a large corporation –– after surveying the school system in depth –– declared that if it had been imposed upon us by a foreign government, we would have considered it an act of war.

We have been at war with ourselves and each other for a very long time. And clearly, profits above people is the priority. Thus, having masses of poorly educated people who are highly susceptible to manipulation –– through idiotic rhetoric, false narratives, and the slow-guns of carefully-crafted advertising slogans –– is of great advantage to those who seek to hold the reins of money and power ongoingly.

Hence, this grim observation by the 20th C writer Charles Bukowsk, which reflects the one I cite at the top of this article by Buckminster Fuller, “Almost everybody is born a genius and buried an idiot.” And, of course, local and global societies all suffer the consequences.

Here’s a little ditty I wrote about it long ago:

Our tendency toward conformity is a problem whose enormity
is rarely recognized as such –– by politicians –– in as much
as it can help them gain dominion over popular opinion
through the use of empty platitudes to influence our attitudes.

Likewise, the fashion industry appreciates conformity
since nothing helps to guarantee that businesses prosperity
as people’s great propensity to dress with uniformity.

Many people today look and act with the low level of intelligence of a group mind –– like a mob or an ant colony. And they often do so with the fanatical zeal of Crusaders of old, who thought nothing of destroying lives in order to Save Souls (and gain new ground for the Church, quite literally). Some Right to Life Crusaders even feel justified in placing the iron jaws of the law (like an old-fashioned chastity belt) around a woman’s reproductive system –– and killing those who get in their way.

I was an unwed mother in the late 1960’s. I never even considered terminating my pregnancy or giving my child away –– though both my parents urged me to do so. I chose, instead, to keep and raise my beloved son. So, I know, first-hand, what it’s like to try to be an adequate breadwinner and parent simultaneously. I was ill-prepared for both roles. And in addition to these significant challenges, I was also burdened by deep emotional pain: I left an abusive relationship when I was two-months pregnant, and then felt compelled by circumstances to return to the original abusers –– unwed and unemployed.

Fortunately, I had a college education. I learn quickly. And my parents fell in love with my son soon after he was born. Thus, they helped us in many ways as best they could, given their own backgrounds as abused and neglected children. But what of all the women who aren’t anywhere near so advantaged, and whose children must suffer because other people who are not opposed to war –– yet are so-posed to be Pro-Life –– want to rule over their Lives but not necessarily improve them?

Though this blatant hypocrisy is conveniently overlooked, the rising rate of suicide among the young is, in part, a testament to it. And our future as a species may come to a sudden halt because some very badly abused children –– who now inhabit grown-up bodies and positions of high political authority –– hold the reins of power in one hand and weapons of mass destruction in the other. In a fit of pique with the flip of a switch, such a benighted soul could ignite the conflagration that destroys all life on Earth in perpetuity. Is this not total madness?!

Clearly, we are living in Backward Land, where everything is a mirror image of what makes sense, spreads love and creates value for us all. So, here is my vision and prayer for the future:

May we each and all find our way back to our heart-of-hearts. May the COMPASS of COMPASSION within them inspire us to take action that offers kindness and support to each other –– rather than endeavoring to exert control over those whose beliefs conflict with our own.

We all need each other and either rise or fall together. So, may every one of every gender be reborn as a Mother of the World whose love for all Life transcends all other considerations. For only together can we ensure the Right to a Life for us all –– that possesses Meaning and Well-Being as well as joy and creativity.

Without that, a life may become an intolerable burden for an unsupported individual. And that burden can clearly sweep us all up in an endless chain of pain and sorrow that obliterates all chances for a better tomorrow.

Coda:  Despite the challenges of being an unwed mother with a young, fatherless child –– my son grew up to be a wise, strong, kind and beautiful man. He is happily married to a woman who was blessed to have a wonderfully loving and supportive mother and father. She, herself, is an outstanding mother of their two young children while my son is the kind of dedicated father he’d always wished he’d had.

May all such challenging beginnings evolve into something more exquisite than we plan. And may people who don’t want a few moments of pleasure to result in conception, practice birth control so that abortion is not the only way out of an unwanted situation.